IMPORTANCE: ​The priority of the project is to promote logistics in the region between the cities of São Luís/MA and Teresina/PI, linking the region considered the great national agricultural frontier of recent times, which presents expressive growth in agricultural production mainly of soy and corn, contributing to the regional development of the North and Northeast of the country, where there are important federal highways. Agricultural production in the region called Matopiba, comprises the Cerrado biome of the states of Maranhão, Tocantins, Piauí and Bahia and accounts for a large part of the Brazilian production of grains and fibers. The main crop in the main producing regions of Matopiba is currently concentrated on soybeans, but other crops such as corn, rice and cotton also play an important role. The improvement of land transport logistics will offer facilities for transporting agricultural production, as well as the use of other modes and the feasibility of exporting production through the port complexes of Itaqui (São Luís/MA), and also of Arco Norte, in Vila do Conde (Belém/PA), being an important logistics corridor for the Midwest. One of the great differentials of the mentioned ports is their location close to the markets of Europe, North America and the Panama Canal, where it is possible to reach the countries of Asia more quickly. 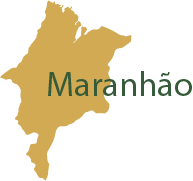